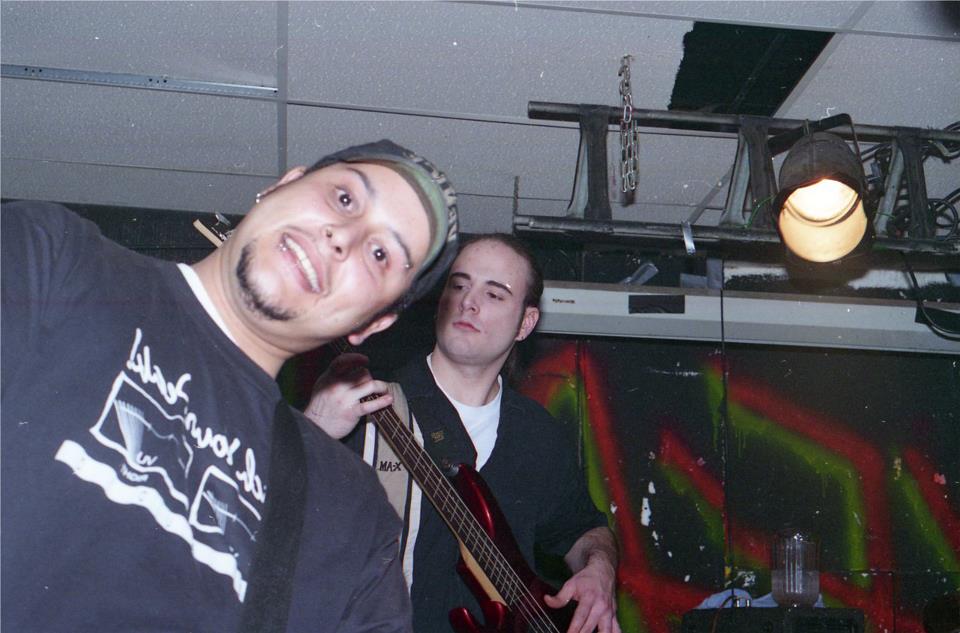 I and the Axiom lost a great friend and supporter of 16 years yesterday. There is no way to express the impact Paul had on my life as a friend, business partner, band mate and general partner in crime. Paul was one of the reasons that often when I felt it was time to pack it in, I kept promoting shows or kept on piercing. He was the kind of guy that would give you the shirt off his back if he thought you needed it even when he had nothing. He will greatly be missed.

Paul came into my life when I was first started piercing at Creative Images back in 94. In fact he was the first lip piercing I did in Des Moines. We immediately bounded on our mutual interest in L.A. punk rock. I remember being bummed cause he was moving back to L.A. However we did hang out a few times before he left at 2nd Ave Foundry. I really didn't think I'd ever see him again and then he turned up the night the Foundry closed it's doors. At the time, I didn't know that he had moved back to start Slipknot. I left Creative Images that February and opened the Axiom down on E 5th and it quickly became the starting point of a night on the town with the boys. An average Friday or Saturday would begin with Lanny and Paul showing up at the Studio with a 6 pack. We would then roam the city looking for something to do and then ending up back at the studio till dawn, listening to music and talking.

We were all looking for the next venue to make live music in Des Moines happen. That and Paul kept going on about this metal band he was in and was recording with. Through Paul I met a majority of the people that would shape the music scene in Des Moines and my life over the next 15 years or so. Though some of them I had met just kicking around the scene. Some of them were the founding members of Slipknot. Through Paul I met my life long friend Frank and countless others like Shawn and Joey. It was around the spring of 96 that the Have Nots started with the line up that would record the demo and play out.

Also it seems like everyone I knew began working at Safari. Paul was the door man and sometime bar tender there for the next 2 years or so. In fact every time that I was ready to quit promoting shows or talent buying, he was the one that bugged me until I started doing it again. As a doorman not only did he keep me putting on shows but helped out countless bands that were playing the club. Not only by spreading the word about them but putting them up or helping them out with food or drinks. Even though he was making about $30 a night.

Even after Slipknot got signed and he wasn't that active in the scene here, he would call me up to try to help up and coming bands get booked into the club. If anything Paul was a music fan first and there were countless bands that he introduced me to or simply bugged the shit out of me till I checked them out. Most of the conversations over the years I was lucky with him were almost always about music. We'd sit there for hours talking about what we were listening to and how we could help them out. I know for a fact that he was a big part of Ross Robinson working with At the Drive-In. If he believed in a band or a person he would go to bat for them full board.

As a band mate it was a complete joy to work with him. He had such a feel for melody and vibe that is rare. In fact through the years I've been offered a chance to work with other people but knew that I would never feel the connection I had with Paul. We talked off and on about doing another project or a new version of the Have Nots but either something would come up in my life or his. I do regret that we never got around to it.

It has been a wild ride being in Paul's life but I wouldn't be the person, I am without him being in it. He greatly effected my life in a great deal of positive ways and I hope I did the same for him. The last time I had a chance to talk to him, he was really excited about having a baby and getting back to work with Hail. He seemed really up and we talked about writing some material for this Have Nots reunion he thought he would have time for when he was done with Hail. He talked about doing a new Body Pit(at least I think it was Body Pit) with Mick. Also there was another project he wanted to work on. Sadly we won't ever get the chance to hear any of that. His music touched so many people all over the world and he lived his dream of making a living with his art. Paul wanted to live forever and I know he would have never lost that love of music and people. There was a number of times when he lighted up my day by just he's greeting. The way he said your name when he saw you or answered the phone, told you that he was happy to hear from you and that you mattered.

Here are some of the comment that were posted on the old site:

a lot of people are feeling

a lot of people are feeling down, I can't imagine how you feel.

Slipknot has been our favorite band since 2003, we were in 3rd grade then. Slipknot has opened up our minds and introduced us to some awesome music... Paul was our favorite member... We had the chance to see Slipknot in October when they were coming to North Dakota... but they didn't come. Everytime we listen to their music we cry, because we can hear the bass line, because we knew Paul was a great person, because Paul died so young, because Paul was going to be the best dad to a little girl, and because he was the heart and soul of Slipknot, he helped start it all... and he is gone, physically... but not mentally, nor emotionally. He will be here in all our hearts, and he is missed and remembered. We miss you Paul. You can't be replaced, though we do hope Slipknot continues to make music, in rememberence of Paul. Rest in peace Paul, you were one bad ass bass player.

This is the best tribute I've seen for Paul. He has touched a lot of lives in a profound way and he will be greatly missed.