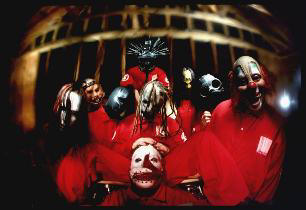 HOW TO LOSE MONEY IN LAS VEGAS

"The only way to make money in Los Wages, NV is as soon as you get off the plane, walk straight into the propeller."--Lenny Bruce.

I left Des Moines with Sophia, Greg, Cory and Sophia's Bulldog Soshia and headed to Lincoln to drop off Soshia, eat and meet the rest of SlipKnot in Omaha. Having a Bulldog sitting on your lap for about 3 hours has a way of getting you covered with slobber and hair but with Soshia it's OK.

We pulled into Lincoln, dropped the dog off and then went to Sophia's folk's restaurant Papa John's. The food was beyond words and if you are ever in Lincoln check it out. We got to the airport checked in and headed for the bar. Of course no Guinness but I had a few anyway. The plane was delayed one hour and they started closing the bar at ten. So soon there was nowhere to smoke or drink.

Went through the metal detector and of course I set it off. No matter if you tell them you're going to set it off or not they still wave you through. It beeped, I took off my shoes and no beep, and on into the plane. This was my first flight and after flying I really don't understand what the big deal is. I mean you wait for hours and then get in this tube and then get off the tube and wait for hours. Anyway on the flight we lucked out and got a Stewardess that copped us free drinks. I had 3 single Malt Scotch and Sodas. That made the flight move pretty quick. We landed in Vegas around 12pm and I headed straight to the smoking section. Surprise, surprise the smoking section had slots. We wasted our first $5.00 there.

We claimed our bags and headed to the Hotel, The Center Strip Budget Inn. It goes without saying that the cabby took us for a ride. What a high class joint this place was. It was right on the Strip and was being torn down the Monday after, so this was the last night they were open. It had porn channels and everything. SlipKnot got the nice rooms and Sophia and I ended up in the older part of the motel. I remember putting the key in and the door being unlocked and halfway wondering if I was walking in on a murder scene.

I unpacked the bag and ran up to the other rooms and got there just in time to see Mick and Sophia trying to unlock a room and this guy with no teeth opens the door and says, "This rooms closed for Maintance. They said there was a gun on the bed. Shawn and the boys wanted to check out Gameworks where they were playing the next night so we headed down the strip. If you've never been there it is a strange place. Very surreal to say the least. You have these guys handing out magazines for escort service everywhere and everything is so clean and bright. Every direction you look there is a sign or flyer calling you to spend money. Kinda like Disneyland on LSD.

After walking forever, we reach Gameworks and of course it's closed. I grab Paul, Craig and Sid and head to New York, New York. We head to the bar and I got my first clue that this weekend would not be all that was promised, they're all broke. Which is the last thing you want to be in Vegas. I lend Paul $20 and head to the cashier to cash a traveler check. Then off to the tables, They're all $10 min., so it's off to the adult Pac Man Machines to lose $50. Paul decides that the bass player for this shitty Jazz band is fucking great, so I'm off to the slots to waste another $20.00. Finally we drag Paul out kicking and head back to the motel.

Next morning we get up and collect everyone and head to sound check. The problem with SlipKnot is, that there is 9 people in the band so it takes a good size stage to fit them. Well Gameworks stage was small to say the least. Also the PA was small. Oh and another problem is they have too much shit and it takes forever to load. After sound check we head to the Excaliber. We sit and wait in the bar. I lose another $10 on those god damn slots.

At last we get to the room and head to the Royal Buffet that promises to be fit for a King Arthur. Well, King Arthur must not have eaten well because it blew. After the feast of suck ass, I took Paul up to the room, cashed a check and headed to the Black Jack tables. 3 hours later I was down $5.00 and decided to call it a day and went back to the room.

More waiting, and then more waiting and then more waiting. Then SlipKnot head off to some meeting and I sat and watched some TV. After about an hour I got bored and decided to see what was off the strip. It took me about a half an hour to get out of the hotel and back onto the strip. You see to go anywhere you have to go through the casino and that takes you in circles.

Once on the street I headed off to find some reality and quickly found out that there is nothing off the strip but vacant lots and seedy motels. It is strange to go from a street filled with people and lights so bright it seems like daytime to almost complete darkness and not a soul in sight. After walking for about an hour I ended up at an Adult Book Store and said to myself, "Hey this is the city of sin. They've got to have all kinds of wierd stuff." It took me three bucks to find out that even though it is the city of sin they don't have shit. Next door was a Strip Club and again I thought, "Hey this is the city of sin." After paying $5.00 I remembered why I don't go to strip clubs in Des Moines. At least it was air conditioned and I could sit. After watching the fake tits swing and sway. I said to the bar tend, "Hey Chief get me a cab."

I took the cab back to Gameworks and the whole ride was like Taxi Cab Confessions. It's like most of the trip reminded me of when I was a little kid and thought that there were hidden cameras everywhere and my family was on some TV show. Any way I made it there just in time to get (thank god) a Guinness and see Amen a band from LA. They were really good but one of those bands that you're sitting there wondering who they remind you of. After Amen came the Headliner SlipKnot. It was fun to watch the crowd because they had no idea what was going to happen. SlipKnot played one of the best shows I have seen them do in a long time. They just got up there with a fuck things up attitude and went at it. It also may have been because they only did 5 songs but that's just me.

After the show I went to the bar for more Guinness and avoided the record people like the plague. As far as all the other bands that played EAT'M it seemed like everyone worth a shit cancelled. Next I watched as they loaded up way too much stuff. I was sitting on a cart watching the stars and noticed one that kept speeding up would stop and then change directions and then speed off. Where's Art Bell when you need him.

We went back to the room and ordered room service and I had a $9 Reuben that was quite good. Then went to sleep. Woke up and headed to check out and then to the airport. OK, the shuttle from the airport to the hotel is free, the shuttle back to the airport is $4.00 per person. We took a cab that was only $7.00 for 5 people. We get to the airport 3 hours early and let me tell ya brother, I just wanted out of there. So, I'm sitting there watching these old people play slots and then they start hitting. So I'm standing in the smoking area and pop in $10 and hit $15. I cash it in and sit down again. This old lady hit a crap load. I go back to have a smoke and put in another $10 and hit about $17. I cash it in and sit down. Just before the flight took off I drop in $20 and lost it all.

The flight into Phoinex the plane kept making strange noises. American West, what a way to fly. We had an hour layover so I called my friend Stacie and talked for awhile and then smoked and boarded the plane. As I'm getting on the plane, I noticed this big fat guy eating this big meal, sitting on the isle. i began to hope that it wasn't my seat but of course it was. It took this guy like 5 minutes to pack up his little picnic. We sit down, Paul with a window and no seat in front of him and me with this guy slipping into my seat. He then began (may I add we're not even off the ground yet) this feast again. He was one of those people that grunts and makes noises when they eat. Between bites he would stop just long enough to brush all these crumbs onto me.

When we got onto the plane they were handing out these bags of snacks and Paul decided he'd scam another and hit the call button. When the attendant came this fat guy takes Paul's bag. This guy only stops eating when told to and we're taxing and he's trying to stuff these 3 bags of food under the seat. We get in the air and he puts down the tray and begins sandwich #3 all the while pushing my arm off the arm rest. Oh yeah and he took up all the storage. finally he gets up to go to the bathroom and I put my elbows out and brace for impact. When we landed I pushed him aside and headed out of there.

So at last we're in Omaha. The only problem is there are seven of us and one car. After debating the situation Craig (thanks Craig) rented a car and we headed home in style. In a brand new Grand Marquee. Once home I sat on the couch in my underwear and while watching TV realized that I could have had a more restful weekend here.