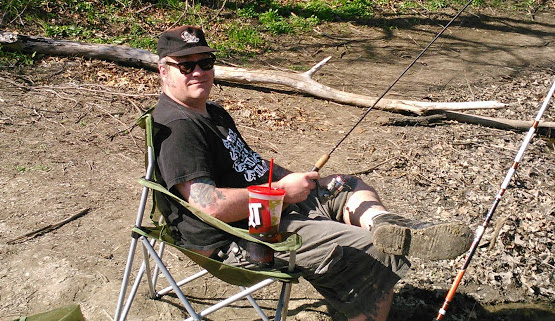 I figured it was high time to admit it, I like fishing. It was a rather surprising and well a bit of a shock to me. For years I had rejected this idea of fishing not because I didn't enjoy it as a kid but because it often seemed another reason to drink beer. Now anyone that knows me knows that I need no excuse to drink beer and often it's been hard to find activities that didn't involve beer. The fact is just like black, Guinness goes with everything.

So it began during early summer last year with my roommate and good friend Lanny MacCleary not new obsession with fishing. The general concept and conversations that followed were a little one side and I'm sure often my long winded rants about music have the same effect on him. The thing is about conversations, especially on subjects that I have little interest in, is the passion in which the speaker has on the subject. Isn't that really the bases of good conversation and the backbone of true friendship.

By mid summer and the heat hitting the point where I only leave the cool controlled environment of the house to walk to the control environment of my car, my son was also drawn into the passion of fishing. Still I kept a cool collective observation distance from it and offered long forgotten advice from my childhood when I could. Of course, I couldn't help but crack jokes about how our move to the Southside had brought out the redneck buried within him or the old joke, "See the problem is that I don't like Fishing, I like catching."

I armed myself with a number of defenses against the impeding sudden attack of Outdoormenism. This was not a new thing and dates back to that time between childhood and adulthood where I decided to rebel against anything that I considered part of the establishment. Many key factors of my childhood fell victim to this, Religion, Skateboarding, BMX, a number of types of music, professional sports of any kind and the wearing of briefs. I held strong in my rebellion with borderline extremism will into my thirties only to have my relationship with my son slowly erode at this commitments often to my complete and utter surprise. The thing is that often the experience was far impacting than it was the first time around. Maybe because it was so normal and average the first time around.

You see in my childhood everyone supported a pro team and everyone went fishing and hunting. Both were high on the bounding with Dad list and in a way was how fathers and sons communicated. The relationship with my son and our bonding has been different in part because of who I am and who he is. Also because the time I spent with my son was different then what was once considered normal. Though I have to admit that I took a lot from my father's play book. Saturdays when I was a kid was Dad's day. Monday through Friday was Mom, work and school days and Sunday of course was God's day but Saturday meant time with dad. It involved fishing, hunting, camping, yard work and house repair will listening to the game on the radio but also museums and other field trips that were not traditional father son activities.

With Quinn we bonded over our great adventures to the Blank Park Zoo, Neil Smith Prairie Reserve, the Iowa Historical Building, The Science Center, The Gold Star Museum, the Des Moines Art Center and countless other attraction. We have always had a strong academic relationship and share that unending desire to learn everything there is to know about something that interests us. So "normal" father and son bounding was limited. We also rode our bikes all over the place and I have to say it really brought back my love of biking but that still kind of feed into my rebellion side and the whole BMX thing.

I guess the first break into this came in the form of Hockey and Baseball. I tried to take him to an Iowa Cubs game when he was 3 or 4 and he must have lasted about 5 endings before he was done with the whole idea and ready to go. So I didn't really consider taking him to another sporting event until James, Quinn's step dad, gave us a couple of tickets to an Iowa Stars game.

As we took our seats and watched the players begin their warm ups, I could feel the cracks of my anti-sports militancy begin to crumble and before the end of the first period, I have to admit I was having a good time. We would enjoy a number of games there until they pulled the plug and I have to admit that I miss those games. Sure I could take him to a Bucks game but my work schedule doesn't fit Friday night games. That summer we began to go to Iowa Cub games nothing crazy but a couple of games a week. There is just something about leaving all your cares and stress at the gate on a warm mild night. Then sitting in that open air with the green grass just spreading out in front of your that makes a baseball game like nothing else. People complain about the slowness of the game but the reality is that is what makes it enjoyable but the thing that stood out the most was enjoying it with my son.

He never really pressured me into fishing but I could tell that he would like me to go with him and Lanny. So one Sunday, I woke up and decided that it was time to give up my nearly 30 year boycott of fishing. Gave Lanny some money to pick up a pole at Case's Bait Shop and got myself a license. Now I have to say as a child I wasn't a bad fisherman. In fact I was pretty good but my main focus was caughting. If I wasn't caughting, I wasn't interested. I figured at the time that I'd spend about $60, have a nice day out with Lanny and Quinn and if I caught something great.

We headed out east of town to a large pond out by Runnels. The two of them running light with limited equipment and me with my lawn chair and every needed supply of Ice Tea. I found my spot and settled in. Now there is something about doing something physical that requires skill that is pure enjoyment. Now somewhere along the line I had forgotten about the pleasure of casting a prefect line out into the water. Not saying that a majority of my casts that day were anything close to prefect but it shocked me how much I enjoyed throwing that line out there and then reeling it back in. I don't know if it was a connection to my past or to one to the generations before.

As I set there not hooking a thing, I began to think about what is considered one of the reason that people left Europe and came to America in the first place. You see the main source of meat for the majority of the population was fish. As the population grew most of the lakes, rivers and streams had become over fished. So it's safe to say that a large portion of Europeans flocked to America for the fishing. Fishing is enjoyed in all ethnic, culture and economic groups and is one of the things that bounds us all together as human beings and bonding we did laughing at each other's mistakes, telling jokes and stories and just enjoying each other's company.

The thing that struck me about half way through the day was that I was doing nothing. Now that may sound strange but think about it when is the last time that you just sat somewhere and took in the world around you? Sure I was actively watching the bobber but there was no TV on in the back ground, no mobile device or computer to check my e-mail every couple of minutes. Just a pole, line and the water. There's a purity in that. Sure my next meal didn't rely on me catching anything but I think for the first time I understood the act of fishing.

To top that off, Quinn came over to me at some point and said that he was really happy that I was there. After it came out he seemed guarded and uncomfortable at his confession and a little unsure how to explain it but I understood. It made me a little teary eyed and made me think of my dad. That nervous twitchy head scratching thing he did when he was self conscious and unsure how to express himself. I messed up Quinn's hair and said I was too.

Since then I've began to feed my love of gadgets and knowledge through fishing and went a number of times but have yet to caught a thing but it doesn't really matter because the joy is in the act not the reward. It's hard not to forget that sometimes but I thank Quinn, Lanny and fishing for reminding me and I will continue to be the person with the most tackle that caught the least amount of fish.