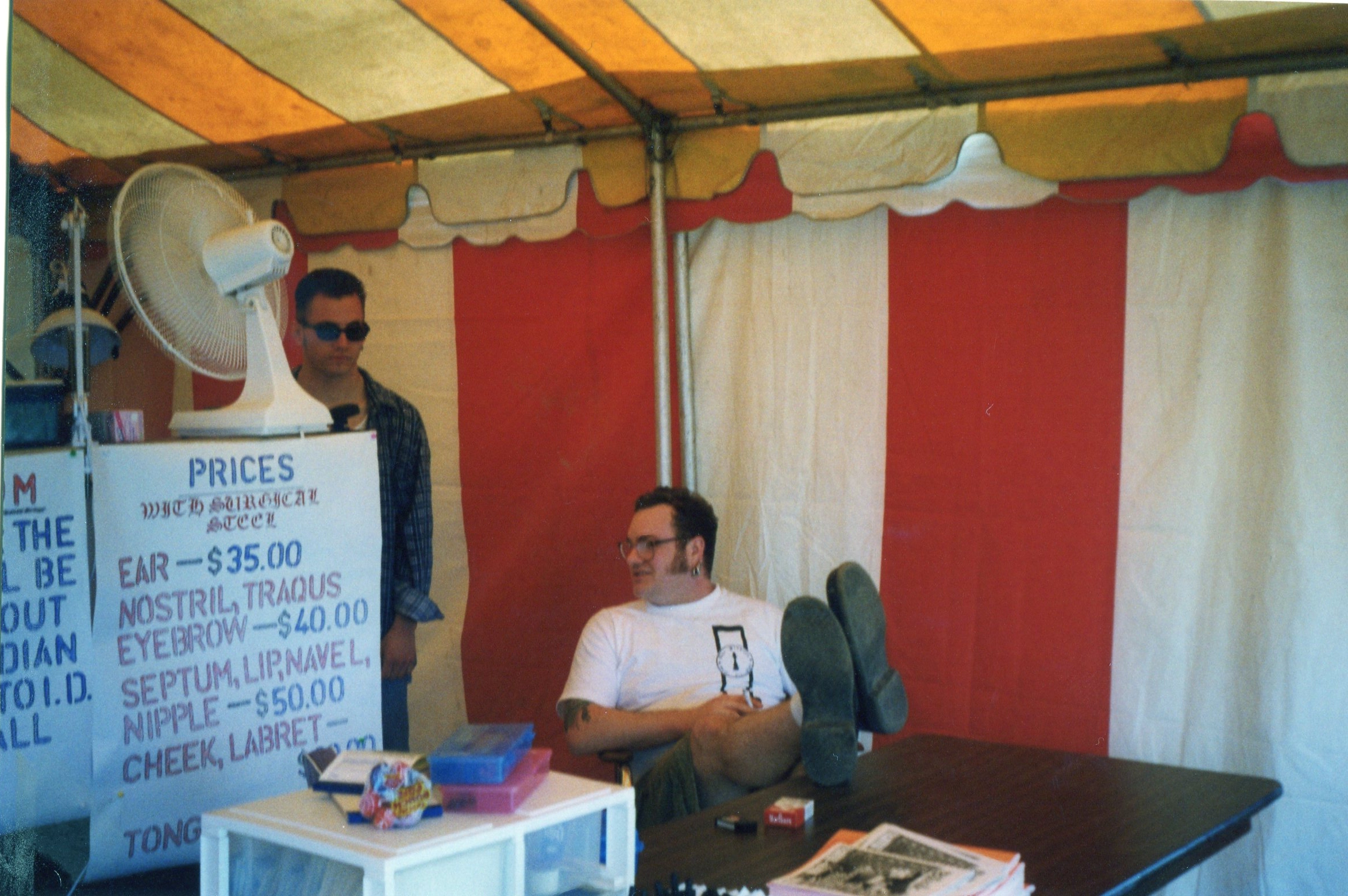 DOTfest2 or HOW TO GET BURNT

The Photo above is in fact taken from the Dotfest the year before in 1997.

My day began with getting up late. Then my Greyhound Oh Gosh Josh!! (his racing name, so if you won money off him you can send his cut in care of the shop. He is enjoying his retirement but would love a few little extras.) deciding to go on one of his little runs across the neighborhood. After getting him back in the house and feeding him and shaving/brushing/showering, I ran out the door. Of course I forgot the sun screen and didn't remember until I hit the gate at 11:10am (ten minutes late) and headed to the second stage.

First off, it had rained all week and I was not looking forward to the mud, but it wasn't bad. I got to the second stage and noticed two things right off. The stage was slanted and the closest outhouse was on the other side of the airfield. Got busy and organized , got the CDs from the car and sat down for a long day. No shade, was a killer, and I knew I was in for it but that's show biz, right. The first band up was 69º, an Urge like band and they kicked it off at 12:30 and were young and OK.

Next up was Beyond a hip hop/rap band that had people break dancing causing the records to skip because the stage just didn't like the bouncing around. Their set was short and put us 5 minutes ahead. Then it all became a blur from then on, from hippy bands (what is it with hippies and outdoor fests? They go to see anything if it's outside.) to alternative metal (DeadFront/Smack Dab) to alternative ska metal/whatever (Great Big Freak why is it that this band gets better every time they lose a member) to Dance (My Scarlet Life) to Rock (Smilin' Jack). I just slammed them on, yelled when they were late and got the thing going about 10 minutes early.

I did take a break to check out a few friends and cool bands like Fast Ball. The Have Nots (my band) opened for these guys about 2 years ago and after we played everyone left but we stuck around and dug on these guys. I remember them doing this song called Secret Beer that has to be heard to understand. For those of you that have only heard the single, the rest of their stuff is power pop done in that way that makes the hair stand on end and plants that big smile on your face. I got to talk to them a bit before they went on and as Sophia put it she was standing there and one of the guys pointed over to where I was sitting and said, "Hey I know that cat." We talked briefly about how crazy things had gotten for them and how they spend more time traveling than playing.

It was nice to see him because there's that pure little kid feel about them where they still can't believe that people dig them. It was cool to see them again. I ran back to the second stage after their set and check that everything was under control. It was, so I ran back to see Rev. Horton Heat. Halfway through their first song someone threw mud at Jimmy (the Rev) and then Jimbo's stuff started acting up. They were great as usual, but I think I've seen these guys too much and nothing holds up to seeing them back in 91 before they signed to Sub Pop and did 2+ hour sets. They were more fun back then, but they still can pull off more power then most rock-a-billy bands out there. The highlight was Physe-o-billy Freak Out. It's funny to watch from the back stage at all those little faces wondering why you're back there and they aren't. I noticed something else: these guys were throwing up these teenage girls onto the crowd so they could be groped and they tore some girl's clothes off. I guess you got to look at it this way, about 70% of the people in this world are assholes. So with around 20,000 people there that means there were at least 14,000 assholes there.

After the Rev. I hit the second stage. everything still running smoothly. So I figured it was time to hit the VIP tent for food. Got there and no food, just beans and picked over fruit. Oh, and a lot of drunk people. From what I heard they were passing the passes back and forth to get free beer. There were a lot of people in there that didn't belong. I ducked out and went back to the second stage. Stayed there for the last few bands and then headed for the back stage. Back stage I hung with Paul and a few of the SlipKnot people as I watched Everclear finish up. This band is very confusing. They did almost metal songs between the hits and then trashed everything and left. This is when people started hitting me up to get them back stage. This is the thing for all you that don't know, the only difference between backstage and stage front is less people. No wild party and most of the bands leave as soon as they are done. Sophia, my hero, got me food and we sat and talked a bit with the Rev about this rock-a-billy girl we both knew from Lawrence.

After eating I went and had my first shitty beer since December with Paul, Frank and Aaron and chatted with one of the cops. He told us that there were 22,000 people there and that they had only arrested 50. Maybe there are less assholes then I thought, but then again that's only the ones they caught. Then Sister Solia hit the stage. They're a dance band from Chicago that is fronted by this hyper girl named Stella (during the Rev she was off to the side of the stage running around in circles). I hate the music but believe there is something there that makes it work. The guys from Atomic Fire Balls and Cory from SlipKnot came up to do a song with them. This to me was the highlight of their set and the only time it will ever happen. Sophia John has been supportive to all three bands and it was cool to see them altogether on one stage.

Last up of the night was the Urge. They came out and moved the crowd as I sat on a folding chair at the back of the stage. It was cool to watch the lights and the cymbals make patterns on the top of the stage and take in the sights. They aren't my cup of tea but I have to say they are growing on me especially the Straight to Hell song. Paul and a few others did a stage dive which was fun to watch as Paul almost lost his pants. Then fire works and good night all. After the fest I stopped by Safari where members of the Urge, SlipKnot (surprise) and Rev Horton Heat were hanging and getting drunk. Just sat there and watched everyone play the fame game and then went home and crashed out like never before. My face was burnt and so was I but overall a good day.

Thanks goes to Sophia and all of you should say so.