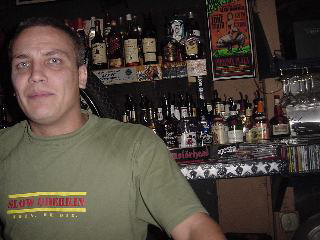 OR IF YOU DON'T LIKE THE CLUB, WAIT CAUSE THE OWNER'S BOND TO CHANGE.

"An honest man is always in trouble." From the film "Henry Fool"

OK so the sky is falling and the world is in terminal down sizing. The world keeps getting smaller but population keeps growing like roaches in a Fast Food Restaurant. Humanity gets uglier with each step toward terminal stream coming from mother nature's giant Raid can but I can't help but feel that there just has to be something we missed along the way. As honesty becomes increasingly out dated along with morals, life long marriage, family, and full service gas stations. I can't help but want to look to the past and plot a course to the future. If there has always been a constant thing in my life it is, "Yes god damn I do have something to prove." All my life I've been told everything from, "Don't be that way." to "Good guys always loose." to "You don't understand, it's complicated." to "Why try." It's no wonder my generation is filled with some many go no wheres and slackers. If there's one thing I notice the older I get it is the world is shrinking. So, we press on and duty now for the future. One thing that I will not do is live in my parents' world. You've got to leave the out stripped world where it belong and insure that change will happen and this time for the better. Too often people get caught up in the big picture and get lost within the helplessness of the whole mess. When all you can really change is what happens in your part of the world. If you control that part and make it better everything will improve. Time is running out Sez the day and put that fist in the face of internality.

Now with that off my chest, let's move onto what is happening in my life right now. For those that don't know my Ex and I had a child back in September. The issues are great and deep but do to her either lying in June or lying now, a window of doubt as to weather the child is mine or not is wide open. After a great deal of complicating and struggle I decide that instead of spending the rest of my life wondering just which was the truth, I contested Paternity. Strange as it may be but I'm really confused as to which outcome I wish for. On one head my heart tells me that the child is mine and I must full heartily be a part of his life. This part of me curses the fact that I'm not in contact with him each and every day and feels that I've already missed way too much of his life. The most painful being that I wasn't present at his birth and do to his mother's strong will dislike of me, I will be driven from a great deal of his life.

It is a very frustrated situation to be a father of a child outside marriage. It is a very hopeless and non-empowering feeling to know that without fighting an up hill and costly battle within the court system, that your inter action with your child is of little or no importance in the eyes of the governorment. The way the laws are set up in this country is to punish men who are unwilling to support their children. For the father that wants to be an active part of his child's has to fight for that right. On the other side there is a part of me that wishes to never have to have any contact with my EX. The idea of the consent reminder that this person which I shared everything with including my love could over night reverse her feelings and become the enemy is not something I want to put myself through for the next 18 years. Understand that there is nothing worst then someone who wish you to change your life to suit them. Maybe it's just me but I will never understand why someone would fall in love with someone you could be instead of the person you are. If I had to change someone to stay with them, I would not stay with them or have gotten involved as deeply as she did in the first place.

Who is the vicitum here? The child. A child that will never know what it's like to have a father and mother that love and care for each other. Have we turned into breeders and lost our humanity? Do we mate to share something deeper or just to spread the seed? I wish I knew the answer. I only know one thing and that's if Quinn is my child I will love him and be a force in his life and all I can do is do the waiting game and make my decision when I know for sure. The hardest part will be dealing with her. In her eyes I've rejected our child and stated that she can not be trusted. When all I want to know is that he is my son and I can't trust her word any longer.

Elsewhere in my life things have been moving at warp speed. New Years was a bust At least this year I got a New Years Midnight kiss but other then the good friends around me it was a bit dull. January started out very slow with little or no shows to speak of. The last week though was a pressure cooker of activity with Jake losing Safari and Jeff, John and Brad "Fathead" buying the club. They changed the name to Jeff and John's former bar name "Hairy Mary's". Then did a great deal of improvements on the bar side of the club like a new bar, tearing out the booths and opening up the front windows. It was so nice to see someone pick up where Shawn had left off. The first weekend in February saw the 3 day 5 show benefit for Leonard Peltier and Creative Visions. We had 35" Mudder, Smakdab, Rev Theory, Drip, Eclipse of Eden, CURD, Halfway Situation, Kinship, Fuzzbuster. Liquid Faces, Skullcaps, Grubby Ernie, Safety Seconds and Nuclear Faces. It was a good time for all and we ended up raise over $1400.00.

Well not really a lot of other things to report other then I've began to promote under the 4 owner at the same club. All for now.