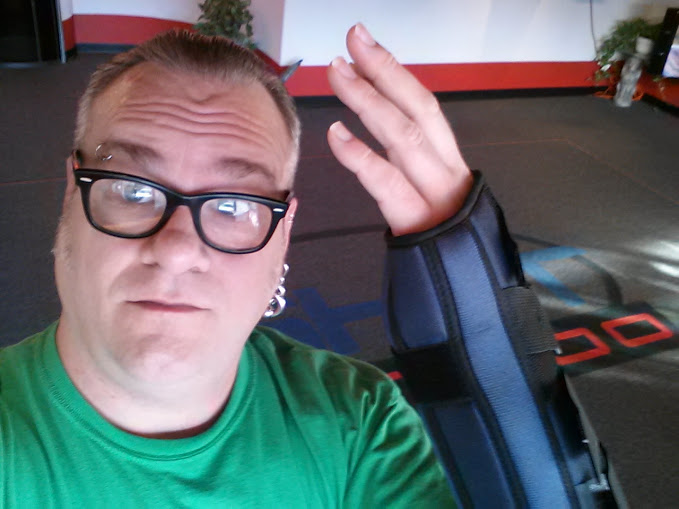 The Art of Falling Down

Yes it is true, I'm once again typing with all ten of my digits. For those that didn't know, I broke my wrist on September tenth. I was Skating Boarding with my son across the street from my house in the Union Hall parking lot. I had come up with the idea of seeing who out of the two of us could manual the furthest. Which was me though Quinn claims to have beaten me. I was demonstrating the fine art of shifting your weight back and forth to gain balance, When, I can only guess was lack of speed, the board suddenly shot forward and out from under my feet. Instead of doing what my 16 year old self would have done and just allowed myself to fall flat on my ass, I reached back and tried to caught myself on my out reached left hand.

Now keep in mind that I have been preaching to my son since he was 2 to just fall and not caught yourself. Anyone that has had as much experience as me at the art of falling down knows, If you can't run out of it or land on your feet, go limp and fall. This method had kept me from avoiding a broken bone until age 43. This is something that I have to say in my younger years I was rather good at. There were far too many falls and teeth shaking crashes to recount here. I can't even begin to count the number of times on BMX bike or Skateboard that I feel 8 or so feet into the plywood flat bottom of some ramp or 30 mile an hour wipe outs. Usually a fall was followed by the minute or so to let the stars fade and to access the damage. This was usually followed by laughing it off and trying it again.

Pain, bruise and contusions were a consent and on going part of my life from age 10 to well into my early twenties when I gave up the bike and skate for punk, booze and slam pit. This developed a high pain threshold and an addition to endorphins and adrenaline. So when the kid picked up the skateboarding bug, I dusted off my Coffin Shaped Dead Guys board and skated my way into some father son bonding. In fact the day before we headed to the Altoona skatepark to play around on some bank and vert riding. Though the Skatepark was disappointing and seemed more designed with drainage in mind than lines. I was happy to know that I could still do some fun as hell front side craves and kick turns. Not really what I would call shredding but fun none the less but a hell of a lot dangerous than the little manual contest with Quinn.

The first thing I noticed was the wrist seemed a little off to the side and not really lined up. In the past I have set a could of dislocated joints and fingers. So the first thing I did was pull the thing back into place and when it quickly slide back out of place I decided that it maybe a good idea to seek medical attention. Though the emergency doc state that this would involve surgery and the nurse pronounced tales of doom and gloom, I was happy when the Doctor the next morning stated that we were going to numb it up and set it. I have to say that the most painful part of the whole thing was that injection.

By far the worst part was being out of work. This was the first time in over 20 years that I was out of work for more than a week. In fact, I don't think I've took more then 3 days off sick a year for the last 18. You always hear people go on and on about taking sometime off for themselves or just to sit around the house. Let me tell you it is not as great as you would think. After two days I was climbing the walls. I had watched everything of worth on Netflix, Hulu and Amazon Prime. Granted I was limited in what I could do. For example no video gaming and typing on the computer and phone was a frustrating game of one handed find and peek. I did start cooking more than I have in years but the first couple of weeks were rough. In part because of the splint that ran from my knuckles to my elbow, causing my arm to be in a postilion of signaling a right hand turn. Once the cast that ran up to just below my elbow was on, there was more freedom but it still limited rotating my wrist. There was also limited mobility in my fingers. I did get to spend a lovely weekend at my sister Kim and Brother-in-Law Terry's with my sis Debbie and nephew Conner. Which is something that I wouldn't have been able to do otherwise.

About three weeks I returned to piercing but there was a level of adaption needed. First I had to wrap the area of my cast around my hand with cloth tape to limit tearing of gloves. Then it was a slight adaption and how I gripped the forceps. It's been great joy to be back and now with the cast removed and replaced with a brace. I'm feeling 95% back to normal. I think the one thing that I missed the most is the interaction with my clients. Which is still my favorite part of piercing,

So that's it one more month in the brace and then I will have yet another part of my body that will know when it's going to rain. I would like to thank Lanny, My Family, and those that bought pre-paid piercings for helping me through 6 weeks without income. Also Skin Kitchen holding my spot open when I had no idea how long I would be out.