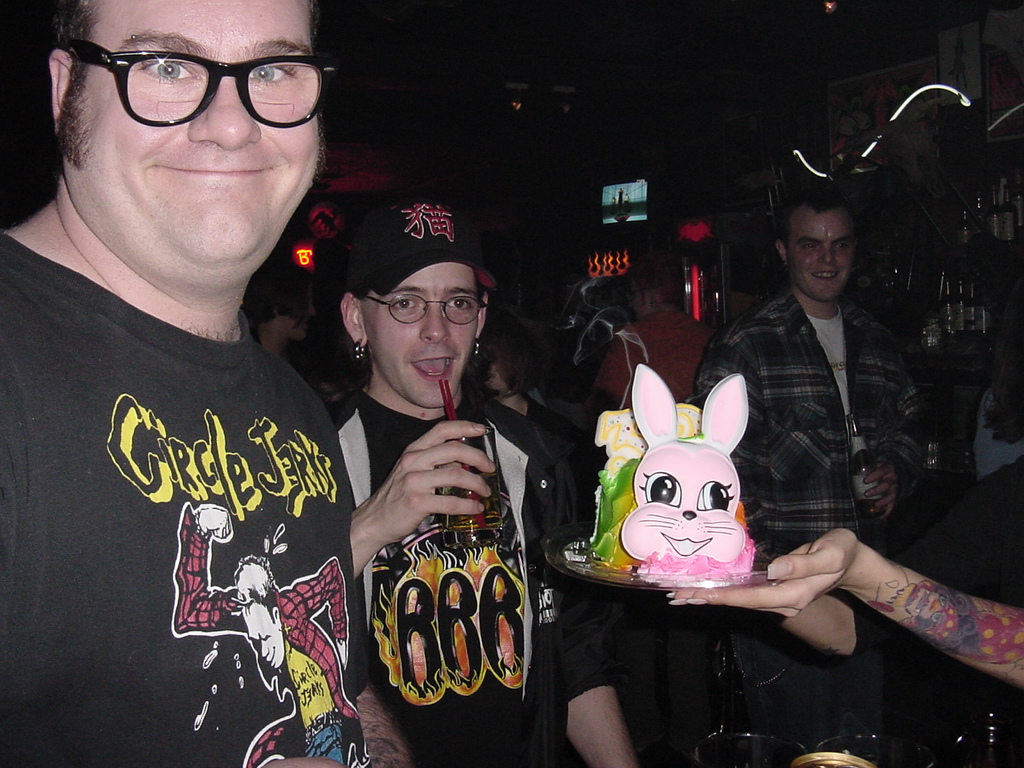 Another Sad Vacation And a Happy Birthday

The Ramones - Strength to Endure

If you ain't heard the news yet, Joey Ramone Dead Sunday April 15th. As someone who came of age in the mid-80s punk scene, the Ramones were like the parents you went sure wanted to have around but always were there when you needed them. Sure their were times when they embarrassed the hell out of you, like in the late 80s when they started to claim they were always a metal band but with a simple 1, 2, 3, 4 they embraced you and made you feel the love of music and punk, you knew they always had. I mean even when they called it quits after 20+ years you had this feeling that it wasn't really over. Like the children of divorced parents we always felt that they would get back together and pogo us through one more night of pure enjoyment.

For many of us the early New York punk scene was just too arty and silly to take serious but then there was the Ramones, The Dolls, Heartbreakers and Richard Hell that kept us from completely writing the whole thing off. They went straight to the heart of things and launched a million punk bands that shaped our punk rock life. They did fancy up the delivery they just gave it to you straight and if there is anything missing in most of the new music and even punk bands it's that. I remember in the Documentary 'X - the Unheard Music' Billy Zoom saying something to the degree that he had read a review of the first Ramones record in Rolling Stone that just slammed the record. They said the songs were too short, there wasn't any guitar solos and etc... and Zoom said, "Theses all sounded like very positive things." They maybe more then any other band took Rock-N-Roll out of the hands of the over talented freaks and gave it back to kids.

Most of the Punks I've asked what was the first Punk band they heard will give you an answer like the Clash or X or whatever. When you ask them what about the Ramones? It's like a given that they heard them long before hearing anything else. We had all heard Blitzkrieg Bop long before we heard White Riot. It was like a given. They were just there like the sky, the moon or the earth. Consent to the end. The foundation of it all and know we've lost one of the corner stones of that foundation and one things for sure, we will be hard pressed to find a replacement.

Like the lost of Johnny Thunders, Stiv Bators, Chris Dee, Jeffery Lee Piercey and the countless others, we lost something wonderful and profound. Another voice in the wild that was willing to share his view with all of us.

On to what's going on with me lately. The Mighty Candy Snatchers rolled through on the 28th of February and reminded me of how much I love Rock-N-Roll. They always just explode on to the stage and rip you apart. As a surprise Pete from the Chicken Hawks new side project the Pete Souix city Trio opened with a mix of blues and raunchy rock n roll. Also on the bill was the long time vets of Des Moines, the mighty Squidboy.

On March 5th the Hellbenders rolled through town and blow the roof off Mary's. If you have a chance to see these guys do it. They are that straight ahead punk that puts a smile on your face and makes you want to drink too much, drive fast and have sex with 18 year old girls in the back of slow moving vehicles. Their in the vain of the Devil Dogs(god I miss them) and the Humpers(I heard the Humpers are playing out around LA under the name of the Vice Principles). Great show and a fucking good time.

I had a Birthday on April 13th. It started at Midnight the night before with Paul(Slipknot) buying a number of Car Bombs for half the bar. By close I was pretty loaded and glad I didn't have to drive. Friday the 13th after having a good day at the shop, I headed to the bar with my long time friend Sophia John who drove in from Lincoln for the party. For my birthday The Street Urchins agreed to play with The Filthy Few and the Last of the V8s(ex-Cretin 66). The night was the way I always want to ring in another year, good friends, good music and lots of Guinness.

As far as the band goes it start with the Filthy Few from Omaha who were a nice surprise. Their music is to a degree in the vain of cow punk with a tough of noise. Great stage show and they dress up which seems to be a rediscovered part of RNR of late. Next up was the Last of the V8s with their own version of straight ahead punk n roll much in the style of the Candy Snatchers.

Last but not least was The local Heroes of Glam The Street Urchins. I've known Mike and Timmy since the old days at the Old Mary's and the 2nd Foundry. Both have been serving me drinks for a number of years at either Mary's or Gts and they have both been a force in the Des Moines scene doing time in The Jones/Radio Caroline(Mike) and The DelStars(Timmy). When the Del Stars and Radio Caroline called it quits they formed the Street Urchins which right now is the top of the heap of Des Moines Rock bands. With make, Glam clothes, lights and smoke they drive through a set of their own brand of Glam in the heart of The New York Dolls and the Heartbreakers.

Their set that night was on fire even if the band felt it was a little off. Ripping through a great sets of original and a few covers they really brought the house down in pure fury and volume. Other highlights was Gus the talent buyer/bartender/manager/Gus of all Trades giving me a Rabbit Birthday cake and a number of birthday shots, well wishers and gifts. Thanks to everyone for making my 32nd birthday a great fucking time. Special Thanks to Gus for setting up the bands and for the cake. You always try to come across as a cold prickly but we all know your a warm fuzzy.