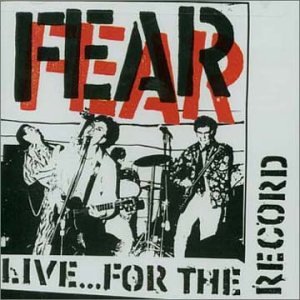 Fear - Live For the Record

This a live record record from a radio show back in 1986. It's a good mix of the first two records(The Record & Have a Beer...) plus a song that is as far as I know can't be found anywhere else called 'What are Friends For?'(it maybe a cover). The recording was done with a 24 track mobile unit so the recording level is quite good. The funny thing is they do not list a bassist on the liner notes so it may have been when Flea was filling in here and there. Who knows it could have been one of the many countless other bassist they had over the years after Dref left.

If you want a best("you know, the ones from whence we got the really big bucks") of... Fear Record this maybe as close as it comes. With 19 track of their best plus PG-13(it was a radio show)jokes and insults. It does remind me that if you take all the crap out of the 2nd record(of course you'd have to keep Book-a-matches)it would have been a good record. Well worth running out right now and buying. The track listing is 'Null Detector', 'I love livin' in the city', 'New Yorks Alright', 'Beef Bologna', 'More Beer', 'What are Friends for?', 'Welcome to the Dust Ward', 'I am a Doctor'(ever wanted to know what the hell this ones all about), 'We Gotta get out of this Place', 'Fuck Christmas', 'Responsibility', 'Hey', 'Waiting for the Meat', 'Camarillo', 'Foreign policy', 'Give Me Some Action', 'We Destroy the Family', 'I Don't Care About You' & 'Let's Start a War'.