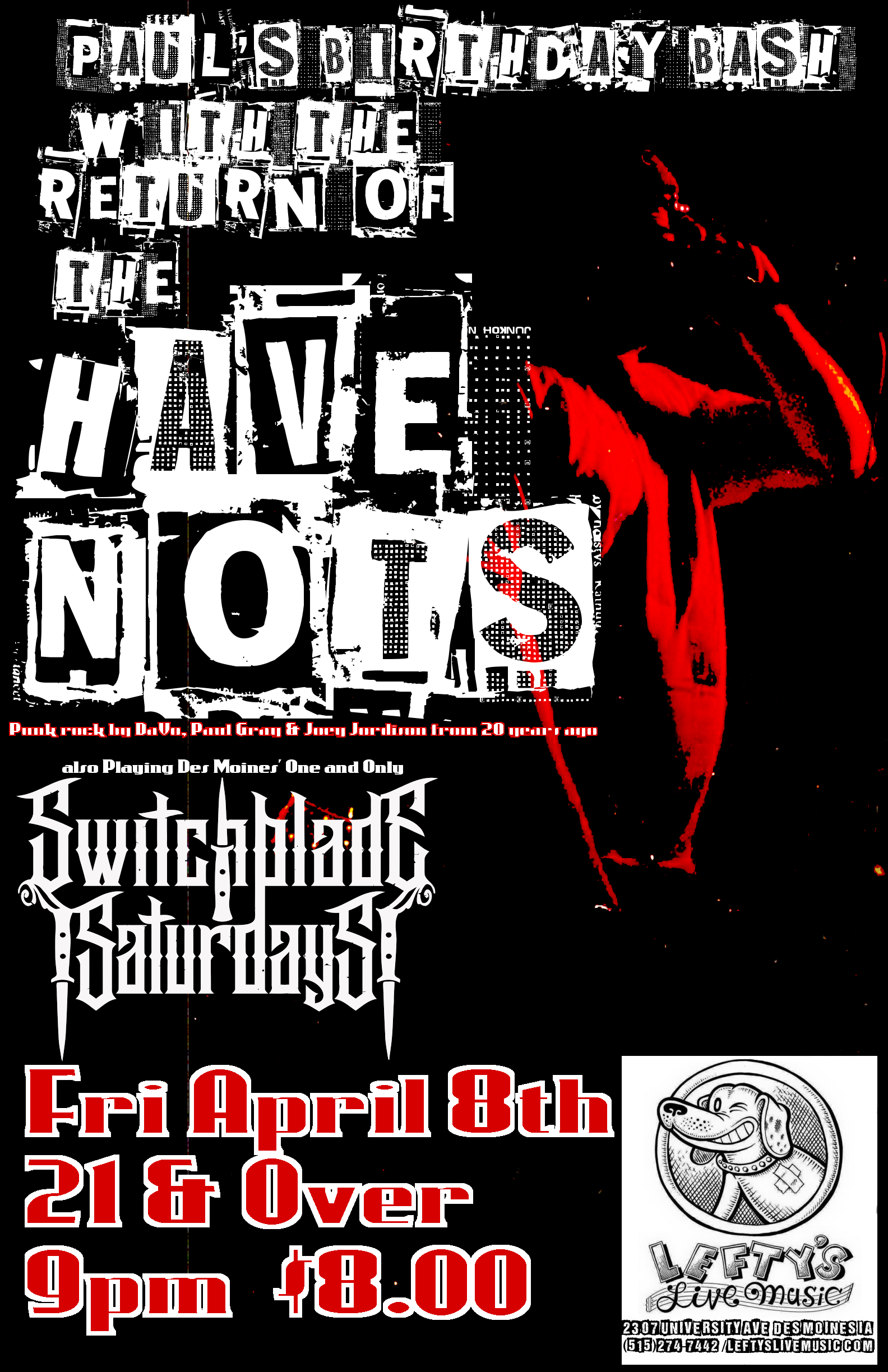 Oh yes the Punk Rock the curse and the joy of my life. That evil mistress that first called me many bad ideas ago and still makes the hair on my neck stand on end. Though my musical taste may have branched out over the years, it's still the bench mark and maybe that was what is was always meant to be. It wasn't so much a movement as much of a standard to which everything that came after should be held to. Maybe I'm prejudicial because though Punk might not have not been my first musical love interest, it's been my longest.

That said there is a lot of the Punk Rock going in Des Moines this weekend and I wanted to point out not only the shows I'm directly involved with but a few of the others.

Too me nothing is more punk than a mixed bill. Some of us are old enough to remember when a "Punk" bill could include anything that wasn't mainstream and this bill is a strange mix that some how works. It has a little bit for everyone. Metal, sleazy Hollywood glam punk and even a charting Christian Active Rock Act. All for the low price of $6.

All Ages 5-9pm Tickets at Midwestix

Michale Graves has played Des Moines a number of times since the 1990s and is best known for being the former front man and main song writer for the post-Danzig Misfits. Though the Misfits are a large influence on his music, he had branched out and produced a style that is all his own making his shows not just a must see for Misfits' fans but fans of the Death or Doom Punk style.

Demonikats are a fairly new addition to the Des Moines scene but their members have a long history in both the Punk and metal scene dating back to the 1980s. Their music calls to early Misfits but at times also the Cramps. If you are a fan of either band this is a show you want to see.

Switchblade Saturdays are straight in your face rock and roll with a decidedly punk edge.

Paul was a long time friend of mine. In fact without Paul's famous, "Come on," prodings over the years, I doubt some of the most important things in my life may not have happened. He was always there to give me that extra little poke to send me in the direction I was meant to go. A few of you might not know that he was also in a band with me called The Have Nots. It was short lived, lasting about 18 months before I broke it up to avoid conflicts with his side project Slipknot and to move on to something else.

Every year that passed since he passed on, I would think to myself wouldn't be great to have a night where we celebrated his music. A night where you could experience something he wrote live and this year after some, "Come on, DaVo" from one than a few people, I decided to do it in the room that he played in so many times. At first I envisioned a night of a number of his projects but as it became more and more apparent that that wasn't going to happen, I did the one thing I knew I could. I got four musicians together with the help of Rob Ogg, learned a majority of the Have Nots Demo and booked a show. So, come celebrate Paul's birthday, listening to some punk rock and have some fun.

A whole day of Punk and Oi! music put together by Matt Mutt. This is his second year and the show will feature 17 Punk and Oi! bands from the Midwest and beyond. The highlight this year is Magoo's Heros which features member of the Oi! Legends the Anti-Heroes.

Maybe you are more into Punk Rock and Metal's harder and more angry little brother, Hardcore, Well, this is a show of up and coming bands that you do not want to miss.

So, there you go, get off the couch, and live life already. I will see you there.