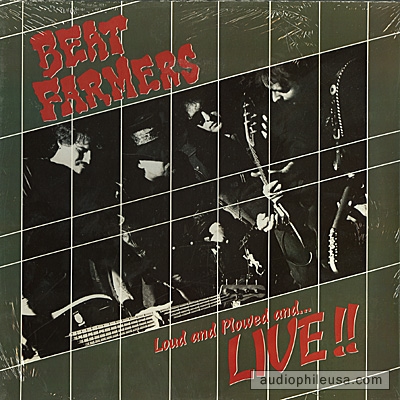 Seeing the Beat Farmers live was a yearly thing for a number of years. The last few years after Country Dicks death I've missed them. The last time I saw them was with the Blasters back in 96. About 3 weeks before Dick Died on stage in Canada. That night I carried him to the bar on my back and I'll never forget watching him stumble across the parking lot to the Van that had been his home for most of his life. He lived hard often getting drunk to the point of not walking. They were a band that lived Rock-N-Roll excess to extreme. Often downing a bottle of the flavor of the week before hitting the stage.

Their sound was a mix of country, punk and Southern rock. Often going from comedic songs to mournful touching songs about disaffection. They were a band with split personalities. You know when Dick moved out from the back of the drums and up front to sing that you were in for a laugh and when he got back behind them Jerry or Joey were going to bring you back to reality. I think too often they were pushed aside as a joke band and nothing more. This was and will always be a lie. They just mixed in all the parts of their lives into their music.

What we have here is a good repersentation of the bands ablity to mix styles and sounds into their own feel. Unlike most live records that stick with the selling potential, this makes it clear why you could see everything from punk to bikers to college kids to prepies at their gigs. From the humor side with songs like Californa Kid, their cover of Lucille and Big Ugly Wheels to their insightful side with songs like 20th centry Man, Blue Chevolet and Hollywood Hills.